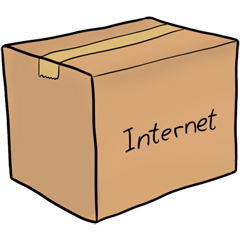 The guys we beat at the Podcast Awards are gonna listen to this and be like, "We lost to this? That dude just slapped his fucking nuts into the mic!"
—Michael Jones
Advertisement:

is a podcast hosted by members of Rooster Teeth and Achievement Hunter, as well as their respective communities, where they would discuss gaming, ponies, and anecdotes from their personal lives, as well as answer questions sent in by the fans.

The cast consists of:

Tropes used in the Internet Box: