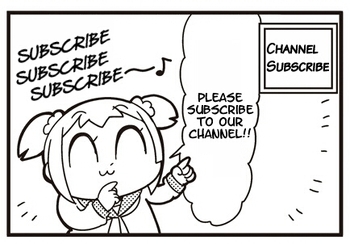 "Don't forget to like, follow, and obey!"
— Catchphrase of Tyreen Calypso, Borderlands 3, an in-universe instance of this trope
Advertisement:

You've heard it a thousand times. You're watching a video on YouTube and suddenly they ask you "and please subscribe to our channel", or maybe they tell you where their subscribe button is located since you could never hope to find it on your own. Typically, any "professional-ish" YouTube video closes with anywhere from 15 seconds to 2 minutes of screens full of flashing animated "Click Me! Click Me!" buttons trying to entice the viewer to subscribe and/or watch all the other videos in the channel, as well as exhortations to upvote and favorite the video. Apparently they expect you to favorite every single video in the series, which makes you wonder if they have a clue what the point of favoriting is. note In the case of YouTube, it's pretty much "because the algorithm encourages it" - likes, comments and subscription counts weigh very heavily on how the site's algorithms figure out what videos to show to viewers. Engagement is everything on YouTube, and thus it is basically mandatory for creators on the site to encourage that engagement to grow or maintain relevance and visibility.

This trope includes authors asking for you to vote for or donate to them, or any other time that authors are giving you free content, but then they expect something in return. This may take the form of wanting your promise to come back, your vote that their product is indeed awesome, or your hard-earned lucre.

This isn't limited to YouTube. Many magazines, for instance, have full-page ads near the front begging you to subscribe if you haven't already, or subscription cards that fall out as soon as you pick up the periodical. Premium TV channels tend to have ads asking the viewers to renew their subscription. Of course, the trope starter might be PBS and NPR, who both use appeals and special programming to get viewers and listeners to donate to their stations to continue to provide the programming.

which is a documentary of various YouTube celebrities including David Choi, Daxflame, Happyslip, and Tay Zonday.

The Shameless Self-Promoter is usually the one who does this. Compare Now Buy the Merchandise.

Now please become a member of

Before Nilesy moved on to streaming, this was at the end of all his videos.

Before Nilesy moved on to streaming, this was at the end of all his videos.