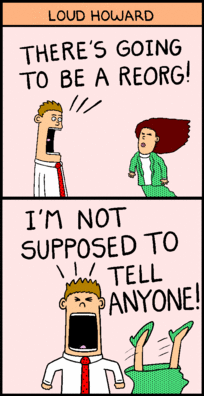 THEY DON'T CALL HIM LOUD HOWARD FOR NOTHING!!!
"HI! I'M A SHOUTY MAN!"
— A shouty man, Horrible Histories

SOME ACTORS AND CHARACTERS BELIEVE THAT THE BEST WAY TO TALK IS TO TALK LOUDLY! THEY DON'T RESTRICT YELLING TO WHEN THEY ARE ANGRY, UPSET OR AT THE BOTTOM OF A WELL CALLING FOR HELP -- THEY SHOUT ALL THE TIME!!!

DIFFERS SLIGHTLY FROM CHEWING THE SCENERY IN THAT IT'S NOT THE ACTING THAT'S CRANKED UP TO MAXIMUM — JUST THE VOLUME!

SOME- Ahem. Sorry about that. Back to the topic at hand; some categories of television shows seem more prone to this type of acting than others:

In extreme circumstances, a character will become so loud that the show can be watched only with the volume turned down, making it a problem when the quieter characters speak. In the worst case scenario, the character will become such a headache that the viewer might be put off watching. These are the shows that you can't have on in the background when you're talking to someone; you'll be drowned out.

Can be justified if the actor in question has had a stage career, where voice projection is critical, or if the show is being taped in front of an audience where people in the back row might otherwise have trouble hearing what's happening on stage. However, the fact that many shows with an audience manage to achieve an "indoor voice" suggest that the trope can be avoided.

Being a Temporal Fish Out of Water from her thousand-year banishment, Princess Luna is still stuck with an outdated royal protocol. Which happens to include addressing her subjects with a loud, booming voice.

Alternative Title(s): ALLCAPS, No Inside Voice

Being a Temporal Fish Out of Water from her thousand-year banishment, Princess Luna is still stuck with an outdated royal protocol. Which happens to include addressing her subjects with a loud, booming voice.