"I always thought the most important rule is 'Why do today what you can put off till tomorrow'." 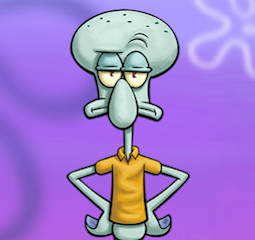 "How did I ever get surrounded by such loser neighbors?"

A cranky and sophisticated octopus who despises SpongeBob and Patrick for their annoyingly cheerful attitudes and stupidity. He is SpongeBob's next-door neighbor and works as a cashier at the Krusty Krab. His hobbies include playing the clarinet and painting self-portraits.