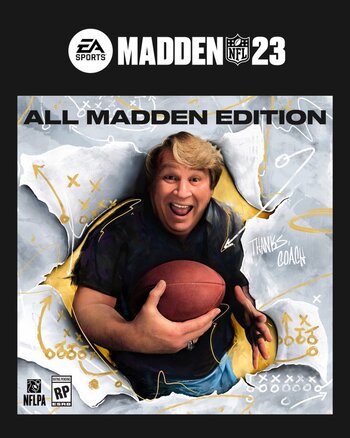 The best strategy in winning this game is to score more points than the opposing team.
John Madden himself returning to the cover for the first time since 2000 as a tribute to his passing in 2021. The All Madden Edition cover, pictured above, uses the same photo of Madden from the first John Madden Football cover from 1988.
Advertisement:

The definitive football franchise. The game that brought video football into the 21st century.

Developed by Electronic Arts, John Madden Football, later shortened to simply Madden NFL, is the namesake of coaching legend John Madden, an American Football game based on the National Football League that has, since 1988, been released annually, and always falls among the top sellers of gaming each year. It's praised for its realistic level of play, to the point where the latest edition is frequently used to predict the outcome of big games up to and including the Super Bowl.

Still, the franchise has some detractors (mainly because, by this point, they've run out of things to add, so the latest sequels are more like roster updates). The most notable incident happened in 2005, when it was announced that the Madden games would be the only football games allowed to use current NFL players and teams for (at least) the next few years. While many people blamed EA for buying out the license because they couldn't handle competition, the truth is that the NFL was going to give one franchise or the other exclusivity; the venerable Madden franchise simply won the bidding war.note Remember Sega/2K selling their NFL game for only $20? The NFL was pissed about that, believing nothing carrying the NFL logo should be presented as a "discount product". Sega and 2K were gone shortly thereafter, fortunately for them their 2K series of NBA games is still quite popular.

Also of note is the Madden Curse, which has felled some of the great football players of the last decade, and was famous enough to have its own page on this wiki before it was decided to be cut. Kansas City Chiefs quarterback Patrick Mahomes, who appeared on the cover of Madden NFL 20, eventually broke the "curse" when he would go on to win Super Bowl LIV, as well as the game's MVP award, on February 2, 2020. Both he and Tom Brady, the latter who was also the cover athlete of Madden NFL 18, share the cover of Madden NFL 22, released after both men appeared in Super Bowl LV.

Madden NFL 18 introduces a full story mode, named Longshot, which focuses on two fictional players - childhood friends Devin Wade, quarterback, and Colton "Colt" Cruise, wide receiver - from the town of Mathis, Texas (though the town's appearance in-game is largely In Name Only) and their struggles involved with trying to play for the NFL. This mode received a sequel, Longshot: Homecoming in Madden NFL 19, which separates the two characters into different plots.

The series in general contains examples of:

Longshot and Longshot: Homecoming in Madden 18/19 feature examples of: