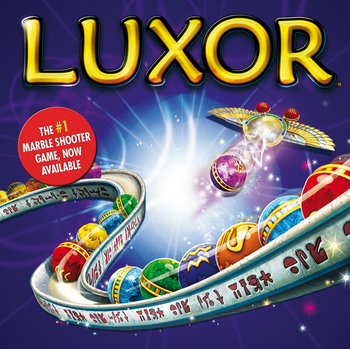 Luxor is basically Zuma, but in ancient Egypt instead of Mayincatec.
Advertisement:

The gameplay borrows heavily from Zuma: a train of multi-colored balls enters the screen and rolls down a long winding track towards a pyramid at the end. If the train reaches the pyramid, you lose a life. To keep the train from reaching your pyramid, you must fire multi-colored balls of your own at the train. Your shots add to the length of the train, but any sets of 3 or more balls of the same color you make are cleared, creating gaps in the train and slowing its overall advance.

Furthermore, if a disconnected segment could make a set of two or more same-colored balls by connecting with the train behind it, it will roll backwards and connect with the train. You can make scoring chains by setting up balls such that the gap you make from clearing a set will cause a segment to roll back and make another set, which in turn will cause more rollback.

Luxor differs from Zuma in the following ways: First, instead of a rotating turret situated in the center of the board, you have a paddle at the bottom of the screen which can only move horizontally and fire straight up. Second, while the balls in Zuma arrive in one long, uninterrupted train, in Luxor they are delivered in multiple smaller loads pushed by mooks of whichever antagonist you happen to be fighting. A mook that has had its entire load destroyed will die and give an extra bonus. If loads are allowed to catch up to one another, they fuse, crushing a mook in the process and robbing you of a bonus.

There has also been a few spinoffs such as the Hidden Object Game Luxor: Adventures and luxor themed mahjong and solitaire games.