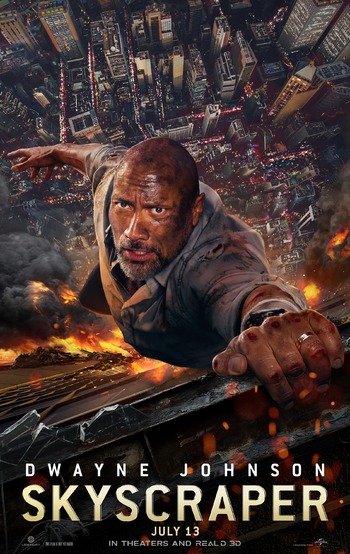 Courage has no limits.
"The Pearl is the tallest, most advanced building in the world. You’ve built a vertical city, but you’ve brought with it every single safety and security challenge that I could think of. Not only have you brought them all indoors, but you’ve trapped them two hundred and forty floors in the air. No one really knows what would happen if things go wrong. But I’m just a glorified security guard, so what the hell do I know anyway?"
— Will Sawyer
Advertisement:

Will Sawyer (Johnson) is a former FBI agent who is now an amputee following an incident during a hostage situation. Thanks to connections from his friend Ben (Schreiber), Will's small security company landed a large job: signing off on the safety and security settings for The Pearl, a massive skyscraper in Hong Kong with highly advanced technological developments, before the higher-up residential floors open for tenants. A terrorist team breaks into the building, trapping Will's wife and kids high up as fire spreads. Framed for the crime, Will races to save his family, and clear his name.

Think Die Hard meets The Towering Inferno, with a dash of The Fugitive for spice.

"My family is the only thing that matters to me right now."