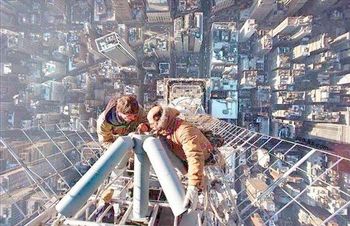 Just another day at the office.
"Everybody looks down when you tell them not to look down, do you know that?!"
— Bill Rago, Renaissance Man
Advertisement:

A Stock Phrase you have certainly heard a million times. Insert in nearly any situation where the characters have to traverse some area where the penalty for a misstep or equipment failure is a one way trip courtesy of gravity. Or, they're hanging over such an area by their fingernails or a very unsteady rope, branch or other dubious support. "Just stay calm, and don't look down" or some variant is uttered.

Why? Because you really don't want to know what's down there.

If it's a long drop, the looker is liable to experience vertigo, which will certain not help with avoiding taking the plunge.

However, sometimes the person won't listen and they will look down anyway. Cue Freak Out. A massive source of Schmuck Bait.

When invoked in a comedy or an animated work, may lead to the realization that Gravity Is a Harsh Mistress... two seconds before you start falling.

Plummet Perspective describes one of the things that might happen if the character does look down.