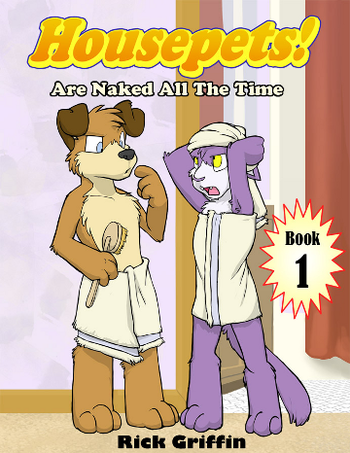 The age old story of Cats and Dogs
"Any problem can be solved with the correct application of pressure to a stupid person's face."
— Grape Jelly Sandwich, Housepets
Advertisement:

We all love our pets, don't we? Now imagine this: your pets are sapient, anthropomorphised, and have the height of a small child. What would they be doing all day? Housepets

portrays such a scenario. This comic by Rick Griffin portrays pets virtually as children who are almost human besides height and differences in clothing style (or lack thereof).

The main characters are Peanut Butter and Grape Jelly, the beloved dog and cat (respectively) of the Sandwich family. In a twist on the classic "smart cat, dumb dog" setup, Peanut and Grape are actually fairly similar in intellect with similar interests, and their subtle personality differences shine like a beacon. Peanut is the sensitive and slightly silly one. He's childlike and excitable and loves playing all kinds of games. Grape is the lazy and pragmatic one, though sometimes she is too sensible for her own good.

Initially, the story centered around the pets of Babylon Gardens and the wacky hijinks they found themselves in, but only about a year into its run, Griffin started to include more mature themes. While never falling prey to Cerebus Syndrome, much of the comic has dealt with the implications of a world where animals and humans are similarly intelligent, including but not limited to: naming pets as heirs, wild animals deciding to live a civilized life, Interspecies Romance, an African micronation which humans never colonized and is run entirely by animals, and novels marketed towards animals and the associated subcultures that they give rise to.

However, life in Babylon Gardens is not exactly normal, as several members of the cast have become embroiled in a strange, cosmic level supernatural game of D&D played by three teenage demigods, the Great Kitsune, the Spirit Dragon, and Pete the Gryphon. At the center of this subplot is Joel Robinson, A.K.A King, a human turned into a dog to serve as Pete's avatar in the game, which occasionally intersects with the pets' normal lives. After the game's introduction, it is often hard to tell which is the comic's central story.

According to the author, the comic was initially inspired by childhood drawings made by Griffin of a dog named "Bino" (pronounced Bye-No). Bino appears as a character in the comic, as the leader of Babylon Garden's "Good Ol' Dogs Club." Portrayed as an antagonist more often than not, he is the middle brother caught between his popular older brother, police dog Officer Fido, and his quirky younger brother, Joey. Currently, Bino is stuck in a toxic relationship with Duchess, a literal glory hound who turns out to be even nastier than he is.

In May 2021, the author announced that the series would go on a hiatus while he rethought some things about it (as well as his life in general). Eventually announcing on twitter

that its current ongoing incarnation would end once the Heckraiser arc is finished in favour of individual stories/volumes, not to dissimilar to how A&H Club is published. As of September 24th, 2021 the hiatus has ended.

Due to Housepets! being Trope Overdosed, this page has been split into the following subpages: