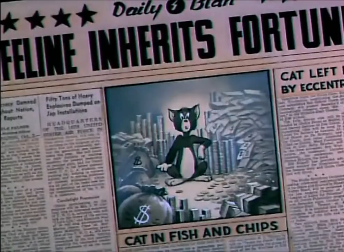 Dr. Alan Graham: Mom left the entire estate in trust to Eustacia Vye. You can try talking to her, but you won't get much back.
Det. Marcus Bell: Eustacia Vye? That a friend of hers?
Sherlock Holmes: Her best friend. As in "man's best friend." Eustacia Vye is Ms. Graham's prize-winning Shih Tzu.
— Elementary, "Up To Heaven and Down to Hell"
Advertisement:

That's the concept behind the Pet Heir plot. Hilarity Ensues as the new caretakers of the pet struggle to keep the pet alive despite the efforts of unscrupulous sorts, that is, Inadequate Inheritors who are next in line to inherit should "anything unfortunate" happen to the pet in question.

There are cases of Truth in Television for this trope, oddly enough. Or not so oddly, if the pet in question is long-lived, like a parrot.

Comparable to Caligula's Horse, where the person not only gives their inheritance to their pets, they even give them senior positions in jobs.

Edgar overhears Madame leaving her fortune to her cats

Edgar overhears Madame leaving her fortune to her cats