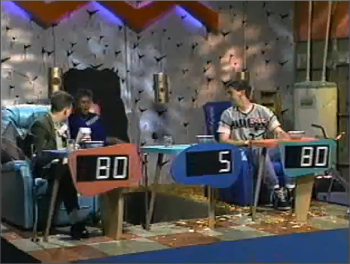 Game Show Trope where eliminated contestants, instead of merely being bid farewell, are forcefully ejected from the studio. Differs from a Walk of Shame, but often times no less humiliating. Generally, the contestants are not even given time to speak before they are removed. Ejections can range from being dropped through a simple Trap Door in the floor, to being disintegrated via CGI, to being launched off the edge of a cliff, to (in the case of fictional shows), either being dropped/launched into a brutal Death Trap, or flung into a big, metal box with “Tiny Loser Chamber” written on it.

The Ur-Example may have shown up in older Western Animation features with singing or talent contests, which inevitably had horrible contestants; their performances generally ended with the judge pulling a lever to open a trap door underneath the contestant.

Note that this does not include shows like Match Game, where losing contestants remain seated at a part of the set used for the upfront game that rotates or moves out of the camera's sight, or as the show segues to either a commercial or sponsor/prize plug as the winner prepares to play the Bonus Round. Nor does this include shows where the lowest-scoring contestant at a defined point of a progressive-elimination game (e.g., the 1978 version of Jeopardy!) is simply eliminated without fanfare – i.e., other than simply being told "thanks for playing" and perhaps told of a consolation gift; in this case, the departed contestant is simply taken offstage.

Compare Drop the Cow and Vaudeville Hook, for similar usage in dealing with overly long or bad stage acts.

This trope serves as the main premise of the following: