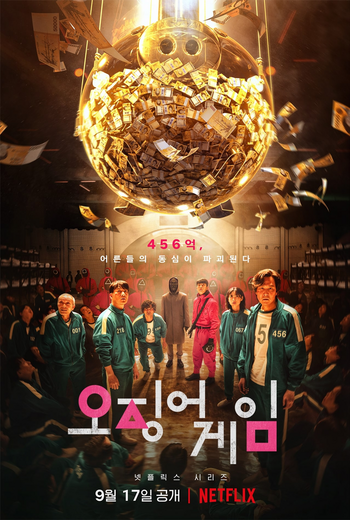 45.6 billion won is child's play.
"You called and volunteered to participate in this game of your own free will. So this is it. I’ll give you one last chance to choose. Will you go back to living your old and depressing lives, getting chased by your creditors? Or will you act and seize this last opportunity we’re offering here?"
— Manager
Advertisement:

Squid Game (오징어게임; Revised Romanization: Ojing-eo Geim) is a 2021 Korean survival drama series created by Hwang Dong-hyuk (who previously directed Silenced). Consisting of nine episodes, all written and directed by Hwang, it was first made available for streaming on Netflix worldwide on September 17, 2021. The series stars Lee Jung-jae, Park Hae-soo, and Wi Ha-joon, with model Jung Ho-yeon in her debut acting role and Gong Yoo and Lee Byung-hun in special appearances.

Middle-aged chauffeur Seong Gi-hun (Lee) lives with his mother in perpetual poverty, knee-deep in debt from a failed business venture and a serious gambling addiction while also struggling to support his daughter after a divorce. One day after missing a train, a sharply-dressed man approaches Gi-hun and offers him ₩100,000note about US$85 if he wins a game of ddakjinote a Korean children's game where players try to flip over a piece of paper by hitting it it with another piece of paper, getting slapped across the face every time he loses. After Gi-hun takes up the offer and wins a few games (at the cost of more than a few slaps), the man then gives him a card and invites him to play similar games with much more at stake.

Eventually accepting the offer, Gi-hun is taken to an unknown location alongside 455 other people, each given a green tracksuit and a number, and all of them monitored by masked guards in pink suits who answer to a mysterious man, also masked, known only as the Front Man. It is explained that all 456 people have unpayable debts, but are being given a chance to free themselves from their dire straits once and for all by playing six children's games over the course of six days, after which they are either eliminated or the winner of a grand prize of ₩45.6 billionnote about US$36,115,000 (₩100 millionnote about US$79,200 per player).

However, it isn't until the first game is underway that it's made clear what exactly was meant by "eliminating" players.

As Gi-hun finds allies and enemies in others amid the physical and psychological twists of the game, several outside variables, including a police officer with a missing brother determined to bring those behind the game to justice, introduce unforeseen complications that threaten to throw the game into chaos. Will anyone make it out alive?

, Hwang announced plans for a second season of the show; the renewal was officially confirmed by Netflix in June 2022

. Hwang has confirmed the returns of Gi-hun and the Front Man, as well as the introduction of a new character, and anticipates that the season will be released by the end of 2023 or 2024. Also announced with the series' renewal was a 10-episode reality game show spin-off

titled Squid Game: The Challenge in which 456 contestants will play the games from the series for a $4.56 million prize.