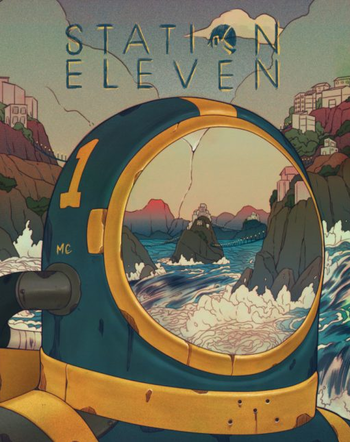 "I remember damage..."
"We're the Traveling Symphony. We travel for a reason. We burn the house down, then go! Just try to make the world make sense for a minute. And, you know, they blame you if you stay! But they love you like you saved them when you come back."
— Sarah
Advertisement:

Station Eleven is a post-apocalyptic TV miniseries based on the 2014 novel of the same name. It premiered as an HBO Max exclusive on December 16, 2021.

The story centers on a young girl named Kirsten Raymonde (Matilda Lawler), an aspiring stage actress studying under Arthur Leander (Gael García Bernal), a hollywood superstar trying to get back to his roots in Shakespeare. When Arthur dies on-stage during a performance of King Lear in Chicago, leaving the crew in chaos, she is walked home by a kindly stranger, Jeevan Chaudhary (Himesh Patel) — but with her parents missing and a deadly disease outbreak sweeping the city, the two are forced to shelter together to survive.

20 years later, after the outbreak has sent humanity into a new dark age, the now-adult Kirsten (Mackenzie Davis) travels the Great Lakes with the Traveling Symphony, a troupe of Shakespearean actors putting on performances for settlements of survivors. After an encounter with a mysterious cult leader known as "The Prophet" (Daniel Zovatto), Kirsten finds herself entangled in a web of conflicts seemingly tied together by one thing: Station Eleven, a sci-fi graphic novel written by Arthur Leander's ex-wife, Miranda Carroll (Danielle Deadwyler).

Told in Anachronic Order, the story explores the lives of the people connected to Arthur before and after the apocalypse, including his best friend Clark (David Wilmot), his second wife Elizabeth (Caitlin Fitzgerald), and his son Tyler (Julian Obradors), as their lives begin to intersect for the first time in two decades.