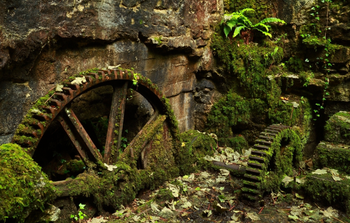 "Not one would mind, neither bird nor tree
If mankind perished utterly;
And Spring herself, when she woke at dawn,
Would scarcely know that we were gone."
— "There Will Come Soft Rains

", Sara Teasdalenote the poem was later referenced in There Will Come Soft Rains
Advertisement:

For our entire history, humans have been taking advantage of our environment and manipulating it to suit our needs. We've built massive cities all over our planet, beating back the forces of nature at every turn. What happens when we're not there to maintain our dominance? Nature returns, often with devastating consequences for the abandoned remnants of whatever we left behind.

This trope comes into play when man or whatever sentient dominant species was around in the first place, has abandoned a location (be it a house, a city, or even a planet) and the natural ravages of plants, weather, animals, and time itself conspire to ruin whatever that society built and return it as close as possible to what it would be if people had never been there at all.

Compare to New Eden, where society can benefit and start anew after nature has erased what they created countless ages ago. Contrast Ragnarök Proofing, where society builds something that will withstand the test of time. Could overlap with Ruins of the Modern Age, Gaia's Vengeance and Humanity's Wake. A Green Thumb with an Eco-Terrorist bent may deliberately invoke this trope with their powers.