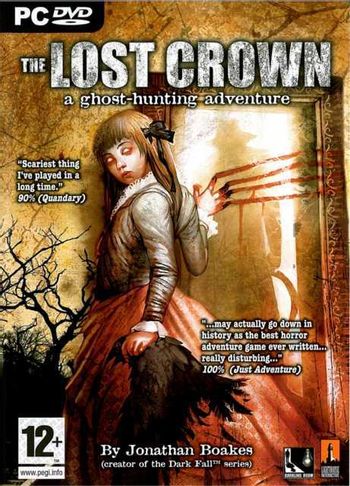 The Lost Crown: A Ghost-Hunting Adventure is a British graphic adventure video game released in 2008. The Lost Crown is the third full title to be written and developed by Jonathan Boakes, author of the Dark Fall games. The screenplay follows the adventure of Nigel Danvers, as he experiences the paranormal in his quest to find the fabled Lost Crown of Anglia.
Advertisement:

The game is vividly set in the fictional harbor town of Saxton in The Fens of eastern England, The Lost Crown follows the adventures of two young ghost-hunters, Nigel Danvers and Lucy Reubans. Nigel has fled London, after the theft of several documents from his employer, The Hadden Corporation. The documents contain proof of Hadden’s involvement in experiments with paranormal forces, and the existence of ‘chasm ghosts’. Two Hadden agents, Mr. Hare and Mr. Crow, are dispatched to capture Danvers and return the stolen documents.

Nigel takes refuge in Saxton, where he meets local psychology student Lucy Reubans. Together they set out to solve local mysteries, study paranormal activity and discover the whereabouts of a legendary Anglo-Saxon crown, thought to be buried somewhere around town. Nigel’s presence in the town does not go unnoticed and there are many threats to his life...not just from the living but from the dead also!

Two more Crown-hunting games, The Last Crown and The First Crown, have been adrift in in Development Hell for some time, while an additional haunting-investigation, Blackenrock, is currently in development. A Halloween vignette-game, The Last Crown: Midnight Horror, debuted on Steam on October 28, 2015.