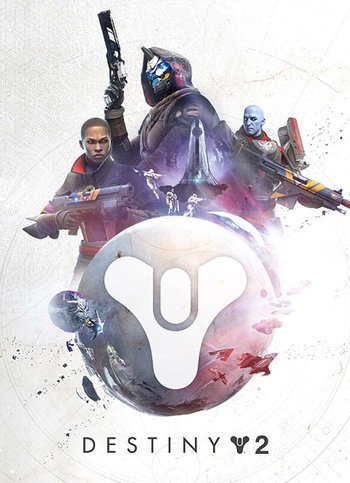 New legends will rise.
"Welcome to a world without Light."
— Dominus Ghaul

Destiny 2 is the first sequel to the Massive Multiplayer Online Roleplaying First-Person Shooter game Destiny, developed by Bungie and releasing on PlayStation 4, Xbox One on September 6, 2017 and PC on October 24, 2017.

Following an invasion by the Red Legion of the Cabal, the Tower and Last City have fallen, and everybody's stuff has been destroyed. Now Guardians, new and old alike, must unite to take back their home from the Cabal and their leader Ghaul. And so a new fight for survival and tons of loot begins.

So far, the game has released the following expansions:

The game originally launched on PC under the Battle.Net client but, after splitting from Activision, in Year Three Bungie released a free-to-play model on Steam called New Light concurrently with Shadowkeep. It has all of the base game's content (both story and multiplayer modes), along with both Year One expansions Curse of Osiris and Warmind. Forsaken and Shadowkeep still needed to be purchased separately.