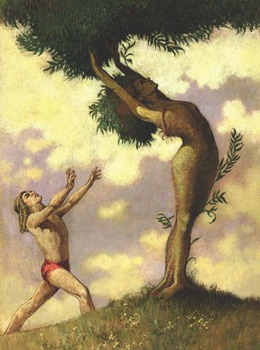 A trope with roots in antiquity.
Dendroo | δενδρόω
(vb.) turn/grow into a tree
In the Passive, it means "to be turned into a tree." Used surprisingly often.
— Ancient Greek Word of the Day, Classics Enthusiast

One of the more extreme ways to get closer to Mother Nature is to become an actual plant.

This trope goes way back to the days of Classical Mythology, when turning people into plants was used as both a reward and a punishment by the various gods of the pantheon.

A Transflormation can be positive, negative, or even neutral under the right circumstances. Becoming a plant may be the result of a Baleful Polymorph in which the victim's consciousness is either rendered inert or forced to look on in silence. On the other hand, it may instead take the form of a species change from Muggle to Plant Person.

It's not unheard of for some trace of the person's physical form to remain after their transformation, such as a distorted version of their face remaining on a tree trunk.

Because people tend to associate positive feelings with nature, a permanent transflormation can be an effective way to show that a dying character is "returning to nature" and thereby finding peace and dignity in death.

Not to be confused with Playing a Tree.

I TURNED MYSELF INTO A PICKLE!!!

I TURNED MYSELF INTO A PICKLE!!!