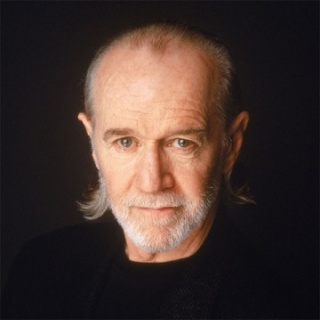 George Denis Patrick Carlin (May 12, 1937 — June 22, 2008) was an American comedian who made a permanent name for himself in the annals of comedy, mostly for making funny all the things that usually make people go Dude, Not Funny!

After a failed stint in the U.S. Air Force and a brief time in radio and news he mostly became a lifelong comedian, initially partnering up with writer/comedian Jack Burns. After the two split in 1962* their sole album, which was recorded in 1960, didn't see release until 1963, Carlin went solo with mostly family-friendly material to great success, but he eventually became disenchanted with his clean-cut image and entered the 1970s as a new comedian. A DIRTY COMEDIAN. That said, he also played "Mr. Conductor" on Shining Time Station (a children's show), as well as having a stint as the Narrator in the North American version of Thomas & Friends, so he wasn't completely Child Unfriendly.note And besides, a stand-up comedian is just a storyteller who makes you laugh. He is also well known for playing Rufus in the Bill & Ted movies and Cardinal Glick in Dogma (which Kevin Smith put him in and which he agreed to appear in mostly so that they could make fun of "the kind of asshole who'd bless his golf clubs for a better game"). Over the course of his life he acted in some fourteen odd films in total, in addition to numerous television appearances spanning everything from The Simpsons to Welcome Back, Kotter and several commercials. He also hosted Saturday Night Live's premiere episode on October 11th, 1975 note and came back nine years later in 1984 on November 10th — the inversion of October 11th — to host again.

His comedy was focused on accentuating the negative, and poked much fun at the Logical Fallacies aspects of American culture, especially regarding politics and religion. He also made jokes about subjects usually considered unfunny, such as torture, rape, genocide, etc. This was actually done on purpose, as he later Lampshaded, to prove that we modern humans weren't much different from our supposedly more barbaric progenitors. That is, he wanted to show that if those things were entertaining then, they would be now - and, judging by the audience's laughter, they were.

Despite dropping Cluster F Bombs a lot, he was a very erudite man, who would peruse the media and the Internet for ideas for his comedy, even encouraging people to do the same for their own cultural and educational benefit. Combined with his disgust for the over insulation of our society from the harshness of reality and its own paranoias over its most minor social issues, one could possibly take his Refuge in Audacity/vulgarity laden humor as an attempt to broaden social awareness.

He also changed the FCC's rules on obscenity. After the "Seven Words You Can Never Say on Television" routine, it's amusing to note that the FCC has more or less modified its policies towards the times when obscenity can be put on the airwaves and what is considered child unsafe around the time of this skit. He is also indirectly responsible for Pay-Per-View, which was the logical conclusion on making audiences of obscene content self selective.

In his later years, he became more caustic and crude (partially due to relaxed social standards and partially due to age), and he struggled repeatedly with alcohol and vicodin addictions.

He died of heart failure in 2008, just a month after his 71st birthday. He was given several awards both during his life and posthumously for his contributions to comedy. Shortly after his death, in a poll taken from nearly 5000 of his fellow stand-up comedians, he was voted the second funniest stand-up comedian of all time. The comedian who beat him for the title? Richard Pryor.

A sort-of biography (obviously written before his death) of Carlin, titled Last Words, was released on November 10th, 2009, which Carlin wrote with the assistance of Tony Hendra, one of the original writers of the National Lampoon magazine. After Carlin's death, Hendra approached the late comedian's family with his plans for the book. The audio version was narrated by George's brother Patrick, who is an author himself, and sounds so much like George, it's scary.

As he was well-known for his great writing, expect to find many quotes taken directly from the man himself (and many that weren't).