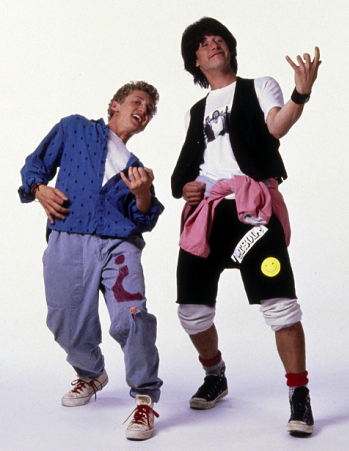 "Dude! We're on TV Tropes!"
"EXCELLENT!"
[guitar riff]
"Be excellent to each other and... Party on, dudes!"
— Credo of Bill S. Preston, Esq. and Ted "Theodore" Logan, quoted even by Abraham Lincoln!
Advertisement:

Bill & Ted is a series of comedy movies featuring Keanu Reeves as Theodore Logan and Alex Winter as William S. Preston, two dimwitted though good-natured rock fans who are apparently the future messiahs, and have to go on adventures to help preserve that future and, in turn, help to create that future to begin with. The first film deals with them having to recruit historical figures in order to pass their history class (otherwise Ted would be separated from Bill and sent to military school). The second film has a villain from the future attempt to kill them and rewrite the future, which leads them on a journey fighting evil robot duplicates and traversing through both heaven and hell.

The first film was followed by an Animated Adaptation by Hanna-Barbera, Bill & Ted's Excellent Adventures, that was fairly faithful (and even had Alex Winter, Keanu Reeves, and George Carlin reprising their roles). After the second film, the franchise was spun into a live-action series that didn't feature any of the original cast. This new cast voiced the characters when the animated edition moved from CBS to Fox and DiC took over production).

Other spin-offs of the franchise include an Eisner-nominated Comic-Book Adaptation, Bill & Ted's Excellent Comic Book, written and drawn by Evan Dorkin for Marvel Comics, several video games, a toyline from Kenner, and even a short-lived stage musical. There was also a cereal

based on the TV show and a Video Game for the Atari Lynx loosely based on the first film.

From 1992 to 2017, the Universal Studios theme parks in Orlando and Hollywood used Bill and Ted in their annual Halloween Horror Nights event as Bill & Ted's Excellent Halloween Adventure, parodying that year's pop culture and entertainment. The 2009 event, for example, featured Twilight, Megan Fox (well, a male impersonator), Watchmen, X-Men Origins: Wolverine, Star Trek (2009), and G.I. Joe, among many others.

In 2020, a final film in the franchise was released, more than 30 years after the original film's debut. The film reunited the first two films' authors, Chris Matheson and Ed Solomon, with both Winter and Reeves as well as a few additional members of the first two films' cast. The film finds Bill and Ted as washed-out, middle-aged failures who are given one last chance to adventure through time and space and save the world.