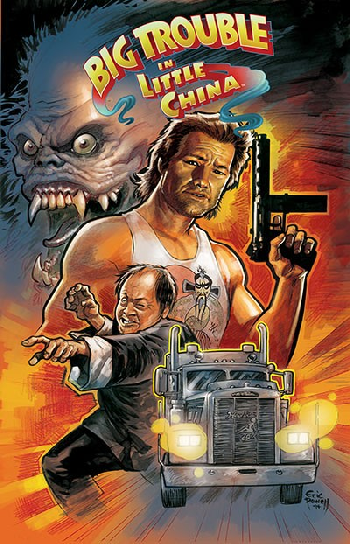 A 25-issue comic series created by Boom! Studios based on the 1986 film of the same name, the comic picks up right where the film left off, with Jack driving his truck through the rain before being suddenly attacked by Lo Pan's demon monster, who had been stowing away on the truck.

Rather than trying to kill Jack, however, the demon pledges its loyalty to him as the one who killed its master and inherited the magical bond. Jack takes the monster in and names it Pete before returning to Chinatown in hopes the sorcerer Egg Shen can release the bond, but when he arrives he's ambushed by Qiang Wu, a disciple of Lo Pan.

Qiang Wu abducts Wang Chi and in exchange for his life he demands Jack travel the Black Road in the Hell of the Seven-Faced Widow and retrieve the souls of the Three Storms. Jack accepts, kicking off his latest adventure.