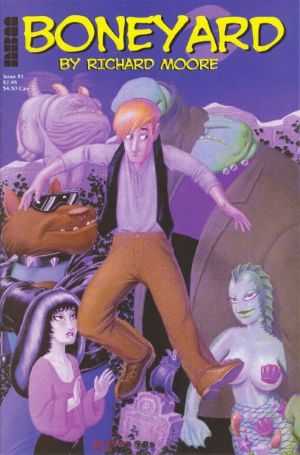 Boneyard is a fantasy comic book series by Richard Moore that ran from 2001 to 2009. It tells the tale of Michael Paris, a young man who inherits a plot of land in a town called Raven's Hollow. That plot of land turns out to be a graveyard, inhabited by an array of monsters. Fortunately, the monsters are quite friendly. They include Abbey, a beautiful vampiress; Ralph, a werewolf; Sid, a dirty old skeleton; Edgar, a talking, glasses-wearing raven; Hildy, a homely witch; Nessie, a busty, nymphomaniac gillwoman; Brutus, her unspeaking and enormous Frankensteinian husband; Glumph, a short and obnoxious demon/mad scientist; Leon and Boris, a pair of very silly gargoyles; Nightcrawler, some kind of worm-thing; and Mr. Vincent, a mortician who's a little overfond of his job.

On the downside, the Devil wants the graveyard for some reason, and is constantly trying to trick Michael into giving it to him.

Mostly humorous, with occasional dramatic touches and a romantic subplot.