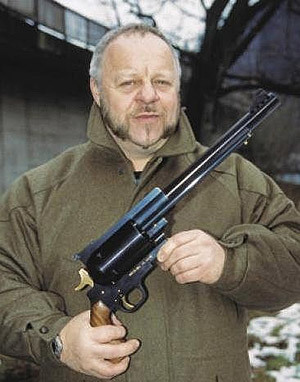 .600 caliber, in fact.
"You see the size of that gun he fired at us? It was bigger than him!"
— Jules, Pulp Fiction
Advertisement:

It's big. It's bulky. It's heavy, sometimes impractical, and loud. It looks really, really cool. Sometimes, it has a nickel finish, or better yet, gold. It may even have a name. It's the Hand Cannon. And its power goes way beyond the standard sidearm.

Magnum-caliber handguns or pistols that use rifle cartridges comprise most of the Hand Cannon trope, due to their superior ballistics. Sawed-Off Shotguns & rifles, grenade launchers

, and fictional pistols that fire powerful laser beams are also considered. A large pistol may not be a hand cannon if it's chambered for a weak caliber, or simply not that strong.

In modern times, more powerful revolver cartridges like the .454 Casull

reign supreme. Eventually, semi-automatics firing the same rounds were introduced. The modern successor to the crown of most ridiculously oversized handgun is the Desert Eagle

in .50 Action Express. Other Magnum semi-automatics also exist, but they are not as cool.

You know you're dealing with this if a character says something along the lines of, "Wow, that's a really big gun," or "He's Compensating for Something". Sometimes, the user's hands are barely big enough to support the weapon. In particularly egregious cases they're fired one-handed or even dual-wielded — try this in Real Life and you'll end up with a broken wrist and/or nose, a gun that's probably on the floor after launching itself out of your hand, and a bullet going nowhere near where it's supposed to.

A subtrope of Bigger Is Better. Differs from BFG in that the Hand Cannon is large for a handgun, while the BFG pushes the limit of what a single person can wield at all. The BFS counterpart is the One-Handed Zweihänder. Not to be confused with Arm Cannon, which is literally a cannon on the arm. Compare Punch-Packing Pistol, where a more standard handgun holds the power of one of these.

Missing his Left arm and trapped deep inside of the Orcus Labyrinth with monsters on all sides, Hajime uses his Synergist abilities to craft a Rail Gun Revolver.

Missing his Left arm and trapped deep inside of the Orcus Labyrinth with monsters on all sides, Hajime uses his Synergist abilities to craft a Rail Gun Revolver.