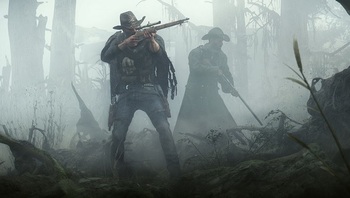 Monsters have overrun our world, and their flesh will be your bounty.
"When two Hunters risk everything, and evil waits unseen, the Hunter becomes the hunted."
— Official Teaser Trailer

Hunt: Showdown is a horror and Western-themed FPS set in a late 19th century Louisiana bayou, developed by Crytek and released on PC through Steam Early Access on 22nd February, 2018.

A rather unique take on the multiplayer shooter and sandbox genre; Hunt puts players in the shoes of monster-killing Bounty Hunters and pits them against up to ten other players, either solo, or in teams of two and three, in a large sandbox map. Players must utilise a wide arsenal of weapons and tools to fight undead monsters, track down clues to locate their target, kill the boss (or bosses), then escape with the Bounty - and, more importantly - their lives.

While the game's world is full of hostile creatures, it also allows players to freely kill each other to eliminate competition, and encourages them to fight over the Bounty once the boss monsters in each map have been killed. Unlike many shooter games, however, Hunt has a very minimal UI, with no minimap, radar, player icons or even kill notifications; there's practically no way to tell how many other people are in the map with you, apart from keeping an eye and an ear out for them.

Oh, and did we mention that this game has permadeath?

Players must hire and outfit Hunters before starting a match, and while Hunters can level up after each successful match, a Hunter that dies or fails to extract before the mission timer ends will be lost forever, including any gear they were holding and any levels they had. Players have a “Bloodline” level that will always gain XP, even when a Hunter dies, but keeping a Hunter alive until the end of a game is far more rewarding than letting them die, for obvious reasons.

Hunt: Showdown began its life as a game called "Hunt: Horrors of the Gilded Age", which was quite a different game; originally being a third-person, over the shoulder co-op shooter similar to games like Left 4 Dead. However, with the close of the Crytek USA office in 2014, the project was moved to the Crytek headquarters in Frankfurt, Germany, and in May of 2017, the newly re-imagined Hunt: Showdown was announced. The game became available for Early Access on Steam in February of 2018 and was fully released on August 17, 2019. The game has a website

to check out for any updates or extra info.