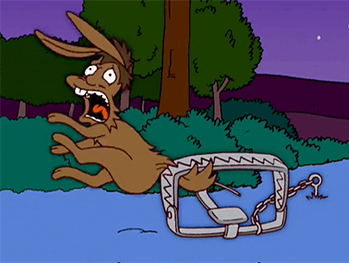 A trap that's huge, about two or three feet across, with big zigzag teeth, and constantly trembles with tension, and snaps if you breathe on it funny—unless you're the intended target, who can jump up and down on it safely. The standard mode of exit is always to chew your own leg off, no matter who or what you are. Palate Propping tactics may offer an effective defense if applied in time.

Depending on the genre and tone, this can be either funny (especially as Amusing Injuries) or horrifying when someone gets snared by it.

For horror movies, you can expect these in wooded areas, no doubt set and placed by some deranged killer.

), and date back to the 1600s. However, they are restricted or banned in many areas of the world today and the modern-day versions tend to not use the steel saw-tooth design seen in most fictional depictions, due to concerns about both animal cruelty and potential injuries to any humans who inadvertently wander into the trap. Instead, rubber or offset ridges are used so that an animal is simply trapped rather than injured.

Compare Mouse Trap. Not to be confused with Clam Trap, which is about literal clams biting people.