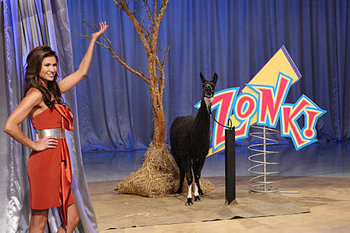 On the bright side, it doubles as a lawnmower and fertilizer.
"This deal is worth nothing."
— Announcer, Let's Make a Deal
Advertisement:

Some Game Shows have gag prizes of negligible value. The name of this trope comes from the term used on Let's Make a Deal, where they almost always involved animals. Though there to cater to Rule of Funny, sometimes these prizes can still be desired by someone; poorly researched ones have even caused legal trouble for the givers.

Sometimes, the gag prize can have something valuable hidden with it, with the producers pulling a fast one on the audience by completely defying expectations that it was a joke. Say you get a cheap birdhouse for a prize — oh, look, someone neatly tucked a roll of money inside! Which in itself can be a feint if said money inside is a skimpy amount.

Contrast Undesirable Prize, which is actually offered seriously and with the best of intentions. Also contrast Consolation Prize; it's unlikely anyone who lands on a Zonk will be actually consoled by it. And, of course, contrast Whammy, which leaves you with nothing, not even a Zonk.

Not to be confused with Air Zonk, a Spin-Off from Bonk.

open/close all folders
Trope Namer
Let's Make a Deal, the Trope Namer, was famous for offering such booby prizes: animals, absurd amounts of food, old and broken motor vehicles, etc. If the Zonk was an animal, it was usually a goat (or goats) or a cow, although the 2009 revival has also offered other farm animals, and even a "Zonkey" (a donkey painted with zebra stripes). The practice was discontinued in the middle of the first season when PETA (naturally) complained about it.
Other Live-Action Television
Fan Works
Advertisement:
Film
Literature
Unscrupulous Radio Station Contests
Some Radio Stations have attempted to pass off Zonks as legit prizes. This kind of thing has resulted in more than one lawsuit