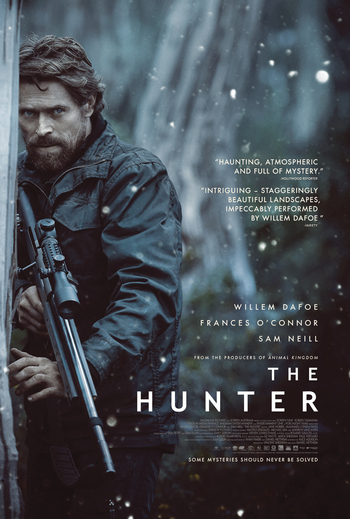 Some mysteries should never be solved.
Advertisement:

The Hunter is a 2011 Australian Drama Thriller film starring Willem Dafoe. Dafoe plays Martin David, a professional mercenary who is hired by a mysterious organisation known as Red Leaf. He has been sent to Tasmania to illegally hunt down the last remaining Tasmanian tiger, intending to collect DNA samples, due to the alleged properties of the tiger's venom.

During his time in Tasmania, he stays with a strange family, consisting of two children, Sass and Bike, and their mother, Lucy (Frances O'Connor), who appears to be asleep most of the time. Their father, Jarrah, disappeared in the bush several months before. They are cared for by a family friend, Jack Mindy (Sam Neill), who also offers to guide Martin around the forest.

Martin poses as a scientist looking to research the Tasmanian devil. He spends much of the film in the Tasmanian wilderness laying traps for the elusive creature. However, things get ugly when the local townsfolk begin to suspect that he's up to something...

Not related to Steve McQueen's last movie The Hunter (1980).