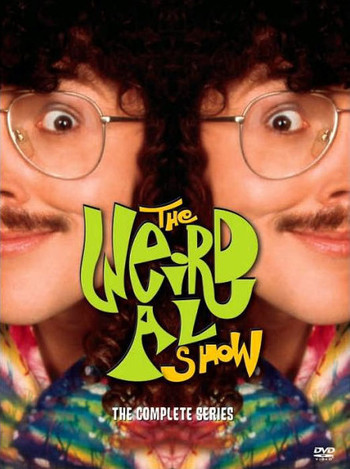 And he really makes a mighty fine jellybean and pickle sandwich
For what it's worth.

The Weird Al Show is a half hour, Saturday morning live action show hosted by "Weird Al" Yankovic. It showed a little adventure of Weird Al living in a cave 20 miles below the surface of the earth with his hamster, Harvey, then taught An Aesop. It was only on for 13 episodes in 1997 before CBS took it off.

Yankovic had wanted to make a straight entertainment program for kids (like Pee-wee's Playhouse), but the show ran into severe Executive Meddling. The previous year, the Children's Television Act had been amended to require U.S. broadcast stations to air a minimum three hours of educational programming for children each week (which affected Saturday morning cartoons on free to air TV). As such, CBS wanted its Saturday morning lineup to focus on shows that met the guidelines. The Weird Al Show had to incorporate pro-social Aesops into each show, which the creators found frustrating to say the least — and that was only part of the meddling they faced. Still, the makers did their best under the circumstances, even if the end result wasn't at all what people wanted out of a wacky kids' show starring "Weird Al" Yankovic.

The song "Lousy Haircut" has Weird Al, resembling Keith Flint of The Prodigy, lament about his silly-looking haircut.

The song "Lousy Haircut" has Weird Al, resembling Keith Flint of The Prodigy, lament about his silly-looking haircut.