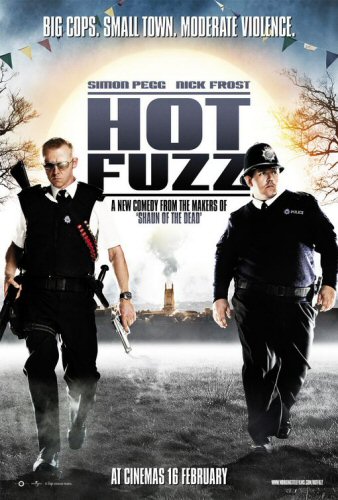 "There is no way that you could perpetrate that amount of carnage and mayhem and not incur a considerable amount of paperwork."
"You wanna be a big cop in a small town? Fuck off up the model village."
Advertisement:

Hot Fuzz is a 2007 British police action comedy film, and a Deconstructive Parody of — and homage to — American buddy cop movie tropes.

Nicholas Angel (Simon Pegg) is the top London bobby, single-handedly keeping the city's crime rate at a record low. He is, in the words of his ex-girlfriend Janine (an uncredited and heavily disguised Cate Blanchett), incapable of "switching off" his police officer mode even while off duty. In fact, his superiors think he is doing too good a job, making the rest of the Met look bad.

Their solution? Promote him out of the way and make him a sergeant in the sleepy town of Sandford, Gloucestershire. Sandford is the winner of the Best Village in Britain award for several years running; it is a village renowned for having no crime... but a lot of accidents. Being set in The West Country means all the typical stereotypes of that region are present, such as thick Somerset accents, farmer folk, tweed and wellies and some good old "Oo-ars!"

Nick doesn't fit in at all; his duties are extremely banal, he immediately clashes with the laid-back cops there, and he is saddled with Danny Butterman (Nick Frost), a rather fat young police officer who desperately wants to be a Cowboy Cop like in the movies (Bad Boys II and Point Break (1991), to be precise) and who quickly begins to hero-worship the intense cop from the big city.

Then a series of grisly incidents occur, leading Angel to suspect foul play, and as he faces mounting opposition in his quest to solve this mystery, he begins to discover just how dark of a secret exists beneath Sandford's idyllic surface...

Written by Edgar Wright (who directed), starring Simon Pegg (who co-wrote) and co-starring Nick Frost (who plays Danny), this film is quite the troperiffic endeavor, as it spends its first two thirds debunking and poking fun at the real-life applications of common buddy cop tropes...right before going full throttle on them and applying every one of them to a T... while still keeping up with parodying them. It's also filled with Ho Yay; even its creators indulged in writing slashfic on Twitter.

This film is the second part of Wright's Three Flavours Cornetto Trilogy, preceded by Shaun of the Dead and followed by The World's End.

Compare the earlier Bad Eggs and Kopps, and later The Other Guys and 21 Jump Street.