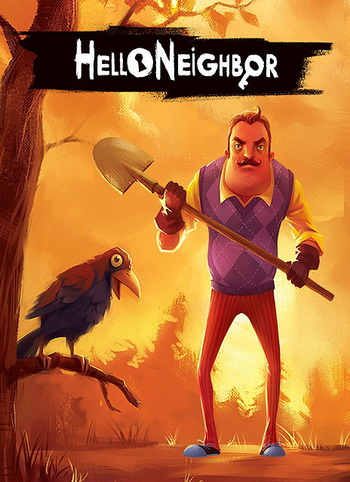 You are an ordinary resident... aren't you?
"You have a neighbor living across the road. Who is he? You don’t know. Why has he nailed up the basement door? Is he holding someone prisoner? Maybe a monster? Or maybe the door was just annoying? Anyway, it's not your business! At least, your Neighbor thinks so."
— The game's web page
Advertisement:

A young boy is playing on the street where two kids have recently gone missing when he hears a horrifying, panicked scream from a nearby house. Sneaking up to the window, he sees the man who lives there wrestling with something unseen and locking it up in his basement. When the man notices the kid spying on him, he promply throws him out, but the boy is now determined to find out who - or what - is in the basement and rescue them.

Thus begins Hello Neighbor, a First-Person Perspective Stealth Survival Horror game developed by DynamicPixels and published by tinyBuild about sneaking into your neighbor's house to figure out what horrible secrets he's hiding in the basement. The Neighbor's A.I. is highly advanced, and will learn from what happens in the game and adapt tactics to stop you. Really enjoying climbing through that backyard window? Expect a bear trap there. Sneaking through the front door? There'll be cameras there soon. Trying to escape? The Neighbor will find a shortcut and catch you.

The game, while originally slated for release on August 29, 2017, was eventually released on December 8 for PC and Xbox One to allow more time for QA testing. A Nintendo Switch version was released in 2018.