Don't Go in the Woods 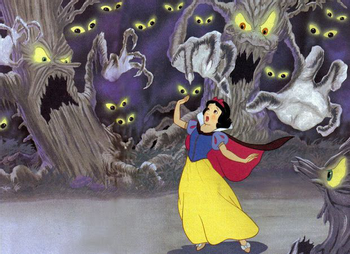 "Beware, beware, the Forest of Sin
None come out, though many go in."
— The Minpins
Advertisement:

In horror/thriller/fantasy movies or literature, holidays, outings, or traveling in woodsy locations never seem to bode all that well. This trope is Older Than Dirt, with the wilderness being viewed as dangerous for much of human history.

When people go deep into the woods, horrible things ensue. They are inhabited by inbred hillbillies, barbarian tribes, psychopathic killers, wicked fairy folk, monsters, and dangerous animals of every sort. Malevolent eyes gaze from every shadow. Perhaps even the trees themselves attack them. The woods could be cursed. There are strange noises in both the day and the night. People disappear. People go insane.

Rarely do horror and thriller movies of this flavor end happily; often everyone ends up dead, although there may be a Final Girl. This has almost gotten to the point at which such movies almost have Foregone Conclusions. Other genres like the Rescue series are more hopeful, with the rescue team racing against time to find the person.

A Sub-Trope of Deadly Road Trip. The darker equivalent of the Horrible Camping Trip. For a doomed wilderness expedition, see River of Insanity. Can overlap with Wild Wilderness, but with much darker overtones. See also Enchanted Forest, for when forests are portrayed as enchanted, mysterious, and full of strange things, which may or may not overlap with this trope. For other wooded environs depicted as dangerous and hostile places, see Hungry Jungle and Swamps Are Evil. Closely related to Nature Is Not Nice, where the wilderness, in general, is inhospitable for human beings.

Those native to Realm of the Fey have an escalating fear of a literally huge forest; however, our party has to venture through in order to save the Eldest Fab Fairy.

Those native to Realm of the Fey have an escalating fear of a literally huge forest; however, our party has to venture through in order to save the Eldest Fab Fairy.