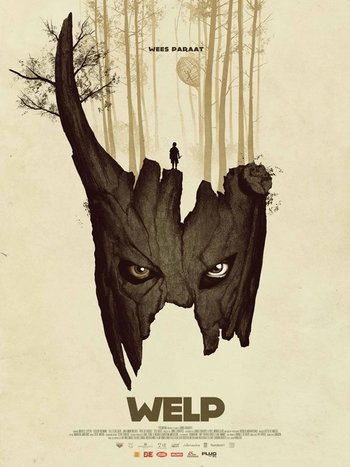 For this trip, you're going to need your Survival merit badge.
"Be Prepared"
— Tagline
Advertisement:

Welp (titled 'Cub in some territories) is a 2014 Belgian horror film directed by Jonas Govaerts. Sam is a young boy in Belgium, who is quite eager to participate in the local Cub Scout troop. However, he is a quiet boy who is recovering from some recent and unspecified traumatic incident. When the troop embarks on a camping trip in France, his scoutmaster hopes this experience will allow Sam to open up and make some friends. The camping site itself is perfect, being adorned with the beautiful French countryside and none of the problems of everyday city life. The Scouts even come up with their own ghost story, that of a werewolf boy named Kai who roams the countryside and preys upon the unsuspecting fools who enter his domain.

Yes, this seems to be shaping up to be a fine camping trip...

But Sam soon starts to notice some strange things. Things that may suggest that Kai is not a ghost story, but an actual being waiting in the shadows...