Film / There's Nothing Out There 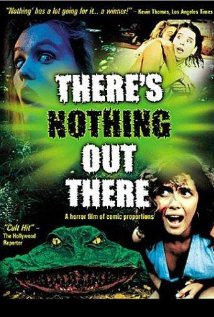 Stacy: "A discussion, huh? About.. horror films, perhaps?"
Mike: "No, about what has the potential of becoming a horror film unless we do something about it quickly. There is something out there. Don't listen to me though, go right ahead."
Stacy: "There's NOTHING out there!"
Advertisement:

It's spring break. Seven teenagers go to a cabin by a pond in the woods for the weekend:

On the way to the cabin, Mike sees a car on its side and overhears that a girl is missing and assumes they are driving right into a horror movie. Everyone else scoffs at the notion and they continue the trip, despite Mike's vocal reservations. As the plot progresses there is lots of Lampshade Hanging about horror tropes. It is kind of like Scream only predating it by five years and with a very meager budget.

Originally distributed by budget video distributor Prism and later on Image Entertainment, it was re-released in 2011 by Troma, and the film is available to watch on their YouTube channel here