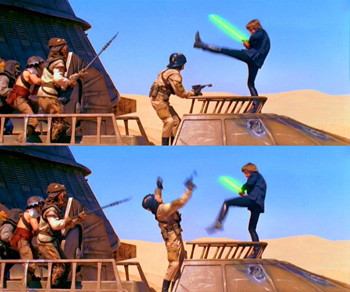 "This [fight] is obviously staged, and more to the point, it's staged poorly."
— General Tarquin, The Order of the Stick, Strip #783

Almost all fighting you see on TV is fake. It's for safety and insurance reasons. Producers just can't have their actors actually hitting each other, as most do not wish to be held liable for broken bones, stitches, etc. So, fight scenes in movies have to be cleverly staged to make it appear as though they are real, but in such a way so that nobody actually gets hurt.

Sometimes this is pulled off extremely well, making for one hell of a great fight scene. Then there are these scenes.

When a fight scene isn't pulled off so well, there's usually a number of factors in play, but it can usually be attributed to poor choreography or simply poor acting. But regardless of the reason, the whole fight comes out looking extremely corny to the viewers and the characters look like utter buffoons.

Of course, this can be a matter of opinion, though some of the examples that follow are so bad that they fail even the most generous benefit of the doubt. Compare Fight Unscene and Special Effect Failure – when they overlap, this is often an example of When Props Attack. See Wimp Fight, What the Fu Are You Doing?, and Fake Special Attack for when this is done deliberately. If the Fight Scene Failure fails and someone really does get hit, expect the producers to Throw It In. Compare Hitbox Dissonance, which can look similar when it happens.

Knife fails to slap, though.

Knife fails to slap, though.