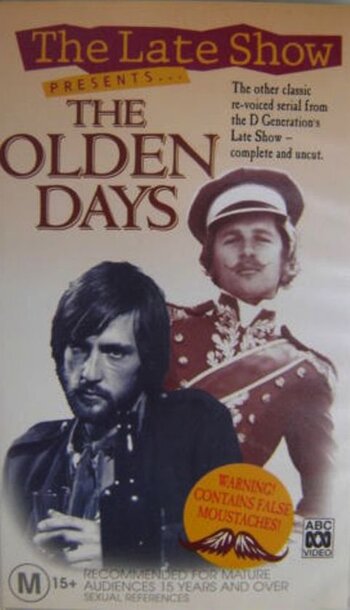 I blame you for this Olden. [...] You're always making me look the fool! And worse still, you're continually going out of focus!
—Governor Frontbottom
Advertisement:

The Olden Days is a recurring Gag Dub sketch that aired on the Australian sketch comedy series The Late Show (1992). It was based on the historical drama series Rush (1974), set during the Victorian Gold Rush of the 1850s. The sketches mainly used the voices of Tony Martin as Governor Frontbottom and Judge Muttonchops and Mick Molloy as Sergeant Olden.

After the first season of The Late Show, this sketch was discontinued and replaced with another Gag Dub, Bargearse.

A trailer for the DVD release, with several clips quoted below, can be found here

The Olden Days contains examples of: