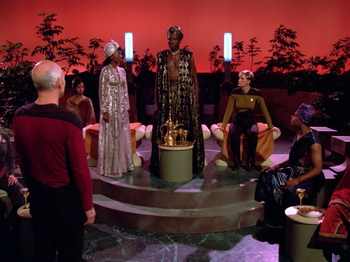 Yeah, uh, this one's not exactly one of the TNG cast's proudest moments. And yet, somehow, it's only the second most racist episode of Star Trek ever.
Advertisement:

The planet Ligon III is about to be brought into the Federation, and right in time for them to provide a local vaccine to a disease that is ravaging several Federation planets. When Picard meets a diplomatic envoy on the ship, the planet's king, Lutan, becomes enamored by Tasha Yar and kidnaps her.

Outraged, Picard demands Yar back, but he learns that the Ligonians have a strict code of honor that prizes cleverness over one's rivals, and therefore Lutan's actions are appropriate for his culture. Picard must navigate carefully to recover Yar without offending the Ligonians enough to withhold their vaccine. Picard meets with Lutan on Ligon III in an effort to negotiate Yar's return, but discovers that Lutan intends to marry her.

Lutan's spurned wife Yareena challenges Yar to a duel to the death for the right to her husband. This was Lutan's plan all along, as he hopes Yar can kill his wife in the ritual duel so that he can be free of her and maintain control of her fortune. Yar is confident that she can defeat Yareena but is told that the weapons they will use in their duel will be poisoned, so one false move will spell death.

Yar and Yareena fight. Yar manages to stab Yareena with her poisoned weapon, and Yareena instantly dies. The Enterprise promptly transports both Yar and Yareena back to sick bay, where Yareena is revived. Once she recovers, Yareena learns about Lutan's treachery and divorces him, granting the kingship to Lutan's aide-de-camp, with whom she has been secretly having an affair. Order is restored on Ligon III, Yar is back home, and the Federation receives their much-needed vaccine.