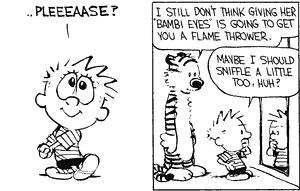 Dogbert: Is it true that you pretend to be cute in order to manipulate adults?!
Little Girl: sniff, sniff
Dogbert: Oh, hey, wait... I'm just kidding. Can I buy you something expensive?
— Dilbert, May 17, 1990

This is a kid who has all the stereotypically adorable childlike mannerisms: thumb-sucking, lisping, Puppy-Dog Eyes, and so on. Really, though, they're just faking it all; they've figured out it's a good way to get what they want.

Sometimes characters like this are Really 700 Years Old (and probably took the form of a small child precisely because it lends itself to being manipulative). On the other hand, they might just be kids who've figured out their elders' emotional cheat codes.

In Japan, this often overlaps with the burikko, that is, a fake Kawaiiko.

Compare Cuteness Equals Forgiveness. Also compare Kawaiiko, as well as the more sinister Enfant Terrible, who just might use this to get away with their horrible deeds, and The Fake Cutie, who does something similar, despite being an adult. Contrast the genuinely-adorable Cheerful Child. A favorite tactic of Little Miss Con Artist.

If this trope is used for evil purposes, it's Cute Is Evil.