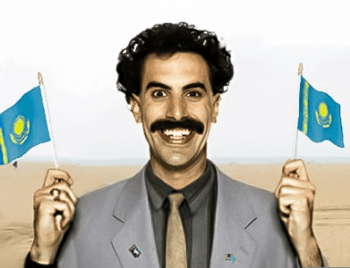 "Great Success!"
Hey everybody, I am from Holland! Isn't that vwierd?
— Goldmember, Austin Powers In Goldmember
Advertisement:

Foreigners are funny! Or so say a good number of comedy shows. The jokes practically write themselves; foreigners mangle the language (especially idioms) in funny ways, they are ignorant of customs in the show's home country, and they have their own bizarre little customs that make no sense. They will either be unsure of themselves, or (more frequently) totally oblivious to how odd everybody finds them. This is incredibly old, probably dating back to when cavemen joked about people in the cave down the field.

The Funny Foreigner is a Cyclic Trope. In the 19th and early 20th Centuries, it seems like at least half of all the Western comedy in existence consisted of this trope (Vaudeville, British music-hall performers...) Gradually, from the 1960s on it become a Discredited Trope due to changing sensibilities. Then it became so rare that it seemed daring and forbidden, and thus became popular again. This can lead to the trope being discredited for some generations and not for others.

Old Funny Foreigner jokes tended to be stereotypes about a particular country. Modern ones do it with a wink by making up a country, choosing a real country almost at random and ignoring any actual facts about it, or simply leaving it entirely ambiguous where they're meant to be from. Part of the joke is that it doesn't really matter where in the Middle East or Latin America or Eastern Europe the character comes from — they're just "generic Latin" or "generic Slav". They can even go so far as to have the character not actually be foreign at all, or playing up their ethnicity because they can get away with it.

In Speculative Fiction, they might be visitors from a completely different world, which has the advantage of avoiding Unfortunate Implications and offense to real-world foreigners (most of the time). If the character is an otherworldly being (relative to the rest of the cast), then the trope is Amusing Alien.

If done poorly, a Funny Foreigner can turn into an Ethnic Scrappy, in which case you can also get Mexicans Love Speedy Gonzales.

Compare and contrast with But Not Too Foreign, Fun with Foreign Languages, No Social Skills, Raised by Natives and Foreign Wrestling Heel. Also see Crazy Cultural Comparison, which is when the Funny Foreigner's behavior is held against that of his host.

The German guy from "Greens' Acres" reappears as a grown man in "Times Circle", along with a son.

The German guy from "Greens' Acres" reappears as a grown man in "Times Circle", along with a son.