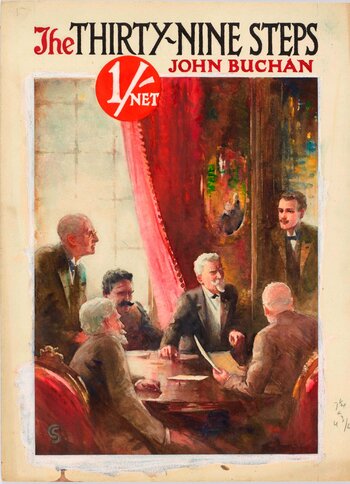 The Thirty-Nine Steps is a thriller novel by John Buchan.
Advertisement:

It's May 1914. Richard Hannay has just returned to London from years in Rhodesia, and he is bored. Then, one evening, he returns home to discover his downstairs neighbour has been murdered. That night his supposedly dead neighbour, a man called Scudder, meets him and tells him the tall tale of an international conspiracy determined to start a war. The conspirators are on Scudder's track and his only hope was to stage his own suicide and lie low for a while. Hannay agrees to hide Scudder in his London flat, but a few days later Scudder is murdered there by enemy agents and Hannay realizes he will be accused of the crime. Hunted by both policemen and enemy spies, Hannay takes to the Scottish moors in a desperate bid to stay one step ahead of the enemy until he can thwart their evil plans.

John Buchan was one of the world's first spy novelists, and did a similar job for the genre as J. R. R. Tolkien did for fantasy. The Thirty-Nine Steps is his most famous work, published in 1915 and set during the run-up to World War I. It was a huge popular success and owed much to its 1903 predecessor, Erskine Childers' The Riddle Of The Sands, and the adventure stories of H. Rider Haggard. Buchan began his writing career as a journalist, but enlisted at the start of World War I, working away from the front lines producing propaganda for the War Office. His experiences of the war, interwoven with a strong sense of national pride, a love of Africa and a belief in the strength of the British character, are themes in many of his novels.

Adapted three times for film (including once by Hitchcock), once for TV, once for the stage, several times for radio, and as a (linear) visual novel.

Richard Hannay returned in five more novels: Greenmantle, Mr. Standfast, The Three Hostages, The Courts of the Morningnote Hannay has only a cameo appearance, but the rest of the series' recurring characters are featured, and The Island of Sheep.

The Thirty-Nine Steps contains examples of: