Radio / The Mercury Theatre on the Air 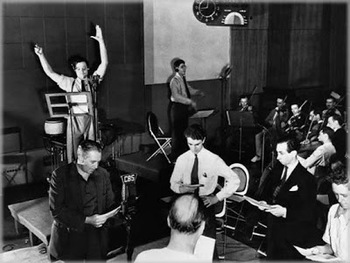 The Mercury Theatre on the Air, created and hosted by Orson Welles, is one of the most famous programs from the Golden Age of Radio Drama.

Welles had first made a name for himself in 1936 at the ripe old age of 20 as an actor and director on the New York stage. In 1937 Welles and his partner, future Paper Chase star John Houseman, formed their own stock company, the Mercury Theatre. This also proved very successful, especially the 1937 production of Julius Caesar in a then-contemporary Fascist Italy setting.

In 1938, CBS hired Welles, already a veteran of radio acting, to perform in a summer series filling the time slot of Lux Radio Theatre. Welles insisted that he be allowed to take his entire Mercury Theatre troupe with him, and CBS agreed. The series (originally titled First Person Singular but renamed The Mercury Theatre on the Air a few months later) debuted on July 11, 1938, with an adaptation of Dracula. In addition to hosting the program, Welles wrote, directed, and played the lead in each episode. His Mercury Theatre cast included several people who would become famous when Welles brought them to Hollywood for Citizen Kane, including Ray Collins, Agnes Moorehead, and Joseph Cotten, as well as musical director and composer Bernard Herrmann.

The show might be largely forgotten today if not for the most famous broadcast in the history of American radio: The War of the Worlds, aired on October 30, 1938. Welles chose to present his adaptation of the novel by H. G. Wells as a Phony Newscast describing a Martian invasion. The next day the nation's newspapers were full of stories of mass panic caused when listeners tuned in and missed the opening announcement of the fictional program. These stories were almost certainly fabricated by newspapers wishing to discredit radio, but they still made Orson Welles famous.

They also resulted in a Retool and re-name of the program. The Mercury Theatre on the Air had run without corporate sponsorship, but after the publicity, Campbell Soup picked up the show and it became The Campbell Playhouse. The new show, debuting on December 11, 1938, also featured a Special Guest star every week, typically a Hollywood actress starring opposite Welles, and veered more towards adaptations of popular movies. The trope list below is based on the original July-December 1938 run of The Mercury Theatre on the Air.

Four of the 22 episodes are lost.

Episodes of The Mercury Theatre on the Air with their own trope pages:

The other episodes use the following tropes: