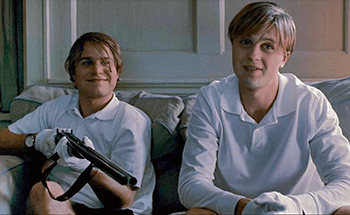 "Well, what else is there to do when life turns on you and you've retreated into some small room? You look out your window. You see people come in and out of this phone booth. The same ones every day. You make up names for them. You imagine their stories. But eventually, you get tired of imagining and follow one of them. And you hear all of his lies. And you decide that his sins should be punished. Some guy shouting into a cell phone full of self-importance isn't gonna notice me."
— The Caller, Phone Booth
Advertisement:

This is when a villain doesn't look like a villain and is even more terrifying because of it. This does not apply to particularly handsome or charming villains - that goes under Evil Is Sexy, Beauty Is Bad or Face of an Angel, Mind of a Demon. Characters following this trope look completely ordinary. You could pass them on the street and never notice them, let alone suspect they murdered someone just the other day.

In fantasy and science fiction shows, this is often what makes Mundanger villains so terrifying. While the normal beasties the protagonists hunt down and slay are obviously fantastic monsters that don't exist in our world, these monsters could be living right next door.

Please note: the identity of many of these villains may be part of a reveal, so please use spoilers wisely.

An Enfant Terrible is usually one of these. Contrast Obviously Evil and Devil in Plain Sight, as well as Face of a Thug (when someone is good or well-adjusted despite having a thug face). Compare Manchurian Agent, where they genuinely are like everyone else until triggered, and Anticlimactic Unmasking, where someone with a distinct disguise looks like this without it. Related with but not to be confused for They Look Like Us Now, where previously inhuman beasties learn to pass for human. The Nondescript is when their "normalness" is taken so far that people can't even remember what they're like. May intersect with Ridiculously Average Guy, who looks and acts utterly normal in every respect.

The Trope Namer is a quote by Wednesday Addams from The Addams Family going in ordinary clothes to a costume party, then claiming, "I'm a homicidal maniac. They look just like everybody else."

This is Truth in Television. Who knows? Maybe one of the tropers could just be this.

Everyone in the Legion can easily pass for a Survivor, being some of the most human-looking Killers in the game. This is shown in their launch trailer, when Frank manages to fool David into thinking he's a Survivor, before donning his mask and stabbing him.

Everyone in the Legion can easily pass for a Survivor, being some of the most human-looking Killers in the game. This is shown in their launch trailer, when Frank manages to fool David into thinking he's a Survivor, before donning his mask and stabbing him.