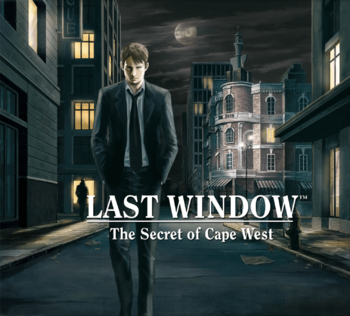 A dark night in a city that knows how to keep its secrets.
"I had no idea that everything would go downhill from there. No idea Ed would finally snap and fire me, no idea that my apartment block was due to be demolished. And that was only the beginning."
Advertisement:

Last Window: The Secret of Cape Westnote (subtitled differently in the original release, it's known as Last Window: Midnight Promise in Japan) is the sequel to the Visual Novel DS game Hotel Dusk: Room 215. This installment again features Kyle Hyde, now in Los Angeles in 1980. After waking up from a day spent sleeping in his car, he gets a message on his pager and calls his employer to find out he's been fired. His troubles compound when he returns to his home at the Cape West Apartments, only to learn the building is scheduled to be demolished at the end of the month. As Kyle begins to gather his thoughts about this, he receives an anonymous letter requesting that he find something called the Scarlet Star in the apartments. He soon realizes that the apartments are connected to his father's death, and begins investigating.

Though Cing's bankruptcy initially threatened No Export for You, it was eventually confirmed for an EU release in September 2010 under the title Last Window: The Secret of Cape West. Although there was no North American release, the fact that the game has no region locking means North American gamers can play an imported copy with no problems, especially since English, French, and Spanish are among the languages that version of the game can be played in.