Things That Go "Bump" in the Night 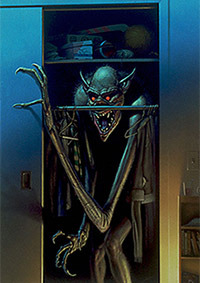 "Bart! I don’t want to alarm you. But there may be a Boogeyman or Boogeymen in the house!"
— Homer Simpson, The Simpsons
Advertisement:

The monster in your closet. The creature lurking in the shadows under your bed. The guy who starts scratching his long, razor-sharp nails on your windowpane the instant you draw the curtains and turn out the lights. These are the Things that Go Bump in the Night. They are very real when you are six or seven years old, and even after you supposedly grow up and move far away, they're still back there, somewhere.

There may be someone you can call, but if not, just stay under the covers.

Frequently found in concert with an Ironic Nursery Tune. Not to be confused with being kept awake by neighbors having nightly fun. Or The Thing That Goes "Doink". Or Monster Closet, a video game trope about hidden enemies.

Advertisement:
The Boogeyman
The most infamous of these entities would be the one simply known as "the Boogeyman." (Also spelled "Bogeyman," "Boogieman," "Boogey Man,", etc.) Who or what this entity is varies wildly with time and culture. (See below under Mythology and Folklore) Sometimes there are several boogeymen, but usually, there's only one. He's also usually affiliated fear in general, and terrorizing children specifically. Sometimes, he's just another TTGBITN. Sometimes, he's the scariest of them all, and might be shown to be their leader. And sometimes, he may even be depicted as the physical incarnation of fear itself. So, when you're told not to be scared of the Boogeyman and that the only thing to fear is fear itself... You are almost really being told that you should fear him. His weaknesses also vary, though a common one is being repelled by light and/or needing to feed on the darkness in the farthest corners of your bedroom. He or his monster friends may be content to show up in some level of light, so long as said light is as dimly-lit as can be.
And of course, while often he doesn't care who's naughty or nice and goes after all kids, another common component of his legend is that he targets only the naughty ones, such as brats and bullies, as punishment. Sometimes, this makes him a benevolent force merely looking to rid the world of nasty kids. Other times, he is a self-righteous flavor of monster. If the former, then it tends to result in a none-too-subtle aesop on why being a good little boy or girl is so important. If the latter, then the "naughty" children may be depicted as champions of freedom.
What he does to the kids that he or his monsters "get" is also rather inconsistent, ranging from simply frightening them and then leaving them be all the way up to eating them.
Even his basic physical appearance is never consistent. He can go from a green goblin man to a fuzzy pink beast to merely a pale man in black. He almost never looks the same, so if he has a true form, it's probably unknown, again, making him creepier. Even The Grim Reaper and Satan have stereotypical appearances: a robed skeleton wielding a scythe and a red-skinned humanoid demon king with horns, a pitchfork, and a spaded tail. But the Boogeyman? Nothing.
All of which perhaps makes him even scarier: how much mystery there is to this entity. With most legendary spectres, from Dracula to the Headless Horseman, their appearance, modus operandi, backstory and so forth are known. But so little about the Boogeyman is fixed that it can make his role as the embodiment of terror itself all the more effective. His moral alignment can shift from a vicious predator to a benign being or at least one who supplies the world with its fear in order to prevent something worse from happening. In the end, so little about him is known that he may be the most mysterious monster ever conjured up by the human imagination. Whatever the case, if you're a child about to go to bed at night, especially one that's been bad... Watch out.