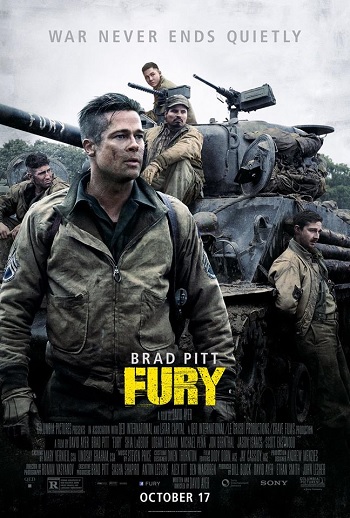 Fury is a 2014 war film, written and directed by David Ayer and featuring an All-Star Cast, about the exploits of a Sherman tank crew in the last days of World War II in Europe.

In April 1945, the Allies are struggling to advance through the heart of Nazi Germany as Hitler orders a desperate final push. The American "Fury" tank crew, led by Staff Sergeant Don "Wardaddy" Collier (Brad Pitt), have engaged in multiple battles and just barely survived an assault that wiped out the rest of their tank platoon. Arriving back at allied camp, Wardaddy is ordered to take along a new assistant driver, Norman Ellison (Logan Lerman), a new recruit who has been in the Army for just eight weeks and has never fired a gun in his life apart from basic training. Norman is introduced to the rest of Fury's crew, including Bible (Shia LaBeouf), Gordo (Michael Peña) and Coon-Ass (Jon Bernthal), and works to gain their trust and get over his shock at the horrific battles.

His time with the crew culminates in them being ordered to undergo a dangerous mission in the heart of Nazi Germany to Hold the Line against encroaching SS troops and defend a supply train. Outnumbered and outgunned, this may be their most dangerous mission yet...

The film is notable for marking the first time in cinema that an actual Tiger I tank is seen on-screen.

Not related to the 1936 film directed by Fritz Lang or the Vietnamese action film Furie.

In this iconic scene, "Fury", the sole survivor of a platoon of Sherman tanks, engages and ultimately destroys its much heavier foe, a German Tiger I Heavy tank.

In this iconic scene, "Fury", the sole survivor of a platoon of Sherman tanks, engages and ultimately destroys its much heavier foe, a German Tiger I Heavy tank.