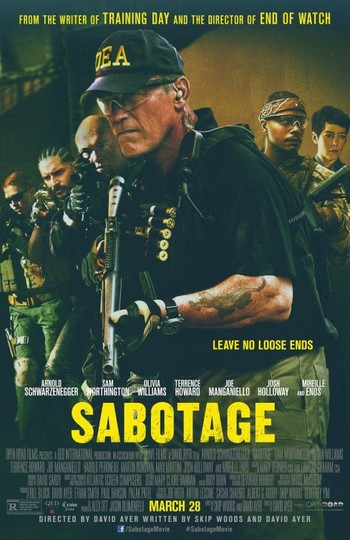 I'll be back...for your drugs.
Advertisement:

Sabotage is a 2014 thriller directed by David Ayer, and written by Ayer and Skip Woods.

John "Breacher" Wharton (Arnold Schwarzenegger) is the leader of an elite team of DEA agents, including James "Monster" Murray (Sam Worthington) and his wife Lizzy Murray (Mireille Enos), Joe "Grinder" Philips (a hulking, bison-like Joe Manganiello), Julius "Sugar" Edmonds (Terrence Howard), Eddie "Neck" Jordan (Josh Holloway) and Tom "Pyro" Roberts (Max Martini). The team comes under investigation for pilfering money from a bust on a drug cartel's safe house. Turns out they DID pilfer the money, but someone made off with it before they could retrieve it. As if the investigation and their own suspicions about each other weren't enough, they are now being killed off one by one, and Atlanta Police investigator Caroline Brentwood (Olivia Williams) is shining an additional light on the team's activities. Is it the cartel exacting their revenge, or is one of the team members the killer?