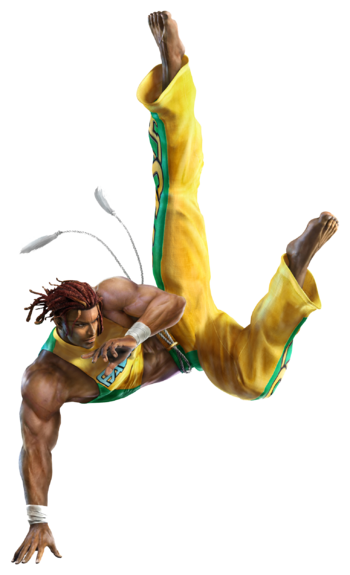 Dread the locks and the kicks.
Advertisement:

Dreadlock Rasta meets Braids of Barbarism and often Barbarian Longhair — a character whose hairstyle preference is dreadlocks, cornrows, or a mane of many braids, will coincidentally be an ass-kicking fighter. If you've got a Five-Man Band and one of them sports this hairstyle, odds are that they're The Big Guy. Applies even to aliens who possibly don't have actual hair, but have something looking like dreadlocks sprouting from their skull.

A previously kempt character may signify that he Took a Level in Badass by showing up with locks so arrayed. Conversely, a character whose Important Haircut is the shearing of such a hairstyle has probably renounced violence. In science fiction works, this hair is frequently associated with the Predator Pastiche.

Not related to The Dreaded, although both tropes may apply to the same character.