Body in a Breadbox 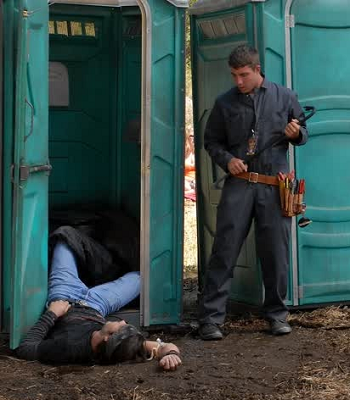 "Hey, Natalie, we've got another stiff in the john."
From Number Nine Penwiper Mews,
There is really abominable news,
They've discovered a head,
In the box for the bread,
But nobody seems to know whose.
—Edward Gorey, The Listing Attic
Advertisement:

Corpses can be found in the darnedest places, in fiction. While every Police Procedural or mystery series uses the routine body-dump sites of alleys, roadsides, dumpsters, harbor bottoms or vacant lots, writers often feel the need to spice up their selection of crime scenes and corpse-disposal methods. When the placement of the corpse becomes so bizarre that its strange location becomes an element of the mystery's plot — not just Whodunnit, but How/Why'ddeydoitthere — then it's a Body in a Breadbox. Or duffel bag. Or refrigerator. Or whatever.

For a body somehow stuck to the ceiling, see Ceiling Corpse. When a character wakes up to find a dead body in their bed, it’s The Murder After. Sister trope to Dead Man's Chest, which deals with the mechanics of fitting a body into a confined space. Often overlaps with Peek-a-Boo Corpse. Wax Museum Morgue is a subtrope.

Not to be confused with Stuffed into the Fridge, a Fan Speak term about characters being hurt or killed to send a message to the hero that originated from a woman being (literally) stuffed into a fridge.