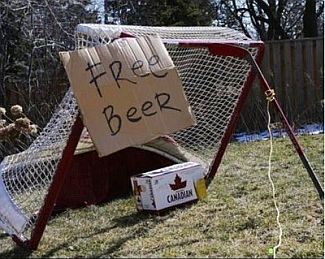 The Canadian version.note As in, the kind that happens in Canada, but also 'to catch a Canadian'
Tails: That's your plan?
Sonic: What? This is how you catch stuff. Haven't you ever watched TV before?
— Sonic Boom, "Valley of the Cubots"
Advertisement:

In fiction, a common way to trap a small animal is to hoist up a cardboard box with a stick, tie some string to it, and put some food in the middle. The expectation is that the animal will be attracted to the food and go in the middle of the box to eat, only then the person pulls out the string and the box falls, trapping the animal. This sometimes works, but it usually backfires, often accidentally trapping someone else.

Compare to Bear Trap and Mouse Trap for other traps frequently found in cartoons. The Hunter Trapper may use the realistic version of this, the deadfall trap, which drops a heavy weight on the animal rather than a box.