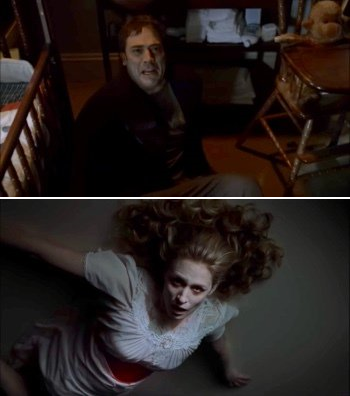 Ceiling Corpse is watching you piss yourself.

A character goes into a spooky house. Walking around he feels compelled to look up. He is shocked to find a body stuck to the ceiling.

This trope is when a person's body is, through supernatural means or otherwise, stuck to the ceiling. Since no one has peripheral vision, it is almost always set up for a shocking reveal. Is usually revealed by dripping blood.

In some examples, the person might not actually be dead, or there might not be enough of a body left to be a recognizable person.

Subtrope of Peek-a-Boo Corpse. Often a subtrope of Body in a Breadbox.

As a Death Trope, there are unmarked spoilers, so beware.