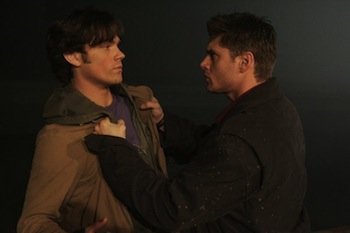 Dean asks his brother to join him when their father disappears investigating a supernatural creature in Jericho, California

On November 2, 1983, Mary Winchester was killed in the family home in Lawrence, Kansas

, by an unknown supernatural creature, in front of her husband John and her sons, Dean and Sam. In the present day, Sam is a law student at Stanford University

with a loving girlfriend named Jessica and a promising career—until Dean arrives, asking for help in tracking down their father. John has been on one of his frequent "hunting" trips, where he tracks down and kills supernatural creatures: John and the boys have been doing this since their mother's death, but Sam left the hunting life to attend college after a falling-out with his father. John hasn't returned from his latest trip, and Dean is worried. Sam agrees to help Dean look for their father.

The brothers track down the last creature John was hunting, a Woman in White named Constance Welch, who had killed her children and then herself after learning her husband was cheating on her. Constance's ghost kills unfaithful men who drive across the bridge she jumped off of. Sam and Dean force her to return home to confront the waiting spirits of her children and she vanishes, screaming. They also find John's journal, full of all his information on various creatures as well as the record of his hunt for the creature that killed Mary, but they can't find John.

Sam returns to Stanford, but when he returns to his dorm, he finds Jessica suspended on the ceiling, bleeding and consumed by fire, the exact same way his mother died. Now that it's personal, Sam agrees to partner up with Dean and return to hunting, hoping that along the way they can find their father and finally destroy the creature that killed their mother and Jessica.

For this episode = 3 humans and 3 ghosts, starting Supernatural off with the death of a Love Interest and a Parent.