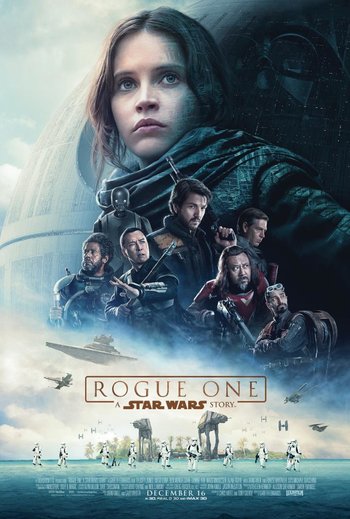 Tynnra Pamlo: You're asking us to invade an Imperial installation based on nothing but hope?
Jyn Erso: Rebellions are built on hope.
"We call it the Death Star. There is no better name. And the day is coming soon when it will be unleashed..."
— Galen Erso
Advertisement:

Rogue One: A Star Wars Storynote also marketed as Star Wars: Rogue One or simply Rogue One is a 2016 film and the first entry in the Star Wars anthology Spin-Off series. It is directed by Gareth Edwards, with a screenplay by Chris Weitz and Tony Gilroy (The Bourne Identity, Michael Clayton), and a story by John Knoll and Gary Whitta (The Book of Eli, The Walking Dead: The Game). It was released on December 16th, 2016.

Nineteen years after the events of Revenge of the Sith, word spreads throughout the galaxy of the Empire's Death Star, a weapon that can destroy entire planets. Fearful of what the galaxy's dictatorship will do with such power, the fractious Rebel Alliance assembles a small team to find the creator of the weapon, Galen Erso (Mads Mikkelsen), for information on how to destroy the Death Star. With no guarantee of survival, Galen's daughter Jyn (Felicity Jones) and her new-found allies must quickly learn to trust each other to overcome the armies of Director Orson Krennic (Ben Mendelsohn), Grand Moff Tarkin (Guy Henry, with CGI being used to grant him the late Peter Cushing's likeness) and Darth Vader (voiced by James Earl Jones). The film's end is set less than one hour before the beginning of A New Hope.

A prequel television series titled Andor, starring Diego Luna as Cassian Andor and Alan Tudyk as K-2SO, was confirmed to be in development, and will release in 2022 on Disney+.

Its story is immediately followed by A New Hope, and the film is followed by The Last Jedi in production order, while the next film under the Star Wars Story label is Solo.

Rogue One provides examples of:

open/close all folders
Tropes A to F
Tropes G to L
Tropes M to R
Tropes S to Z
"Your Highness. The transmission we received. What is it they've sent us?"
"Hope."
Feedback

Example of:
Rule of Cool